Woman Sleeps Through Bear in the Kitchen 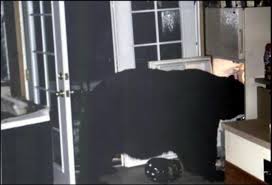 Sara Edwards of Ketchum, Idaho, slept through a bear invading her kitchen.Wow, talk about a heavy sleeper. I think most people wouldn’t be able to sleep through a bear invading their kitchen. Add in a barking dog and the fact that the woman in this story was asleep on the couch right next to the kitchen, and her slumber seems even more remarkable. But, according to her husband David Edwards, it was a good thing his wife slept through the bear invasion.

According to the Edwards, a black bear broke into their home in Ketchum, Idaho, entered the kitchen and proceeded to lick the leftover Chinese food from a cast iron pan on the stove.

Edwards told the Idaho Mountain Express that he was awakened at 3 a.m. by his barking dog. Edwards walked past his wife, Sara, who was asleep on the couch, and his aggressively barking Irish setter-Lab mix, Stanley, to discover a black bear on its hind legs with its paws on the stove. The bear then stood up and looked at Edwards.

Edwards said that was the most shocked he’d ever been. His immediate thought was to wake up his wife and get her away from the kitchen. However, he said, “I couldn’t tell her there was a bear in the house because she would have just lost her mind. She gets very upset over spiders.”

So instead, he simply woke her up and led her to the bedroom without mentioning the bear. Then he crept back into the kitchen to discover the bear had left through the wide-open kitchen door.   I wonder how his wife reacted when she found out she’d slept through a bear break-in.

Do you think you could sleep through a barking dog and a bear in the room next to you?     by:  Stephanie Mallory