RSS
← How to Identify a Gray Wolf
Fire Without Matches → 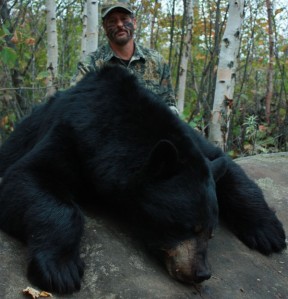 Black  Bear  are  known  predators  and  Ontario  has  the  largest  population of black bear than anywhere in the world. Furthermore, north-western Ontario leads in the concentration of these animals than elsewhere in Ontario, and, rates highest in population concentration  for all of Ontario that also allows for bating practices.

Many deem baiting unfair, giving the hunter a considerable advantage. But contrary to what some would have us believe, it’s far from easy and holds no guarantees!  Bear can sneak in undetected, grab a morsel of food and disappear as fast as they arrived. Bear can also skulk around the bait for hours, never showing themselves. As experienced outfitters we’ve learned that many of our bear will move in cautiously to inspect the provisions. The advantage of hunting in the fall is bear are eager to fatten up for the winter.  The biggest advantage to baiting is that, if and when a bruin finally commits to the bait, it allows the hunter a  an opportunity to assess size, stature and time for shot placement.

About Bear
Black bear habitant range can span from two to 10 miles and resident populations often hold a variety of boars, sows and cubs, so it’s not uncommon to have multiple bears visiting the baited site.  Ontario only offers a FALL BEAR HUNT therefore the chance for the large TROPHY bear is increased dramatically.  Most hunters fear poor coats or hides due to the fall hunt but our area does not suffer that fate. With little to no burrs or ticks, our bear don’t succumb to ticks causing ‘rub’ or dry patchy fur.  We also are known for our high number of white chevrons (patches) to make your trophy even more unique. Black bear 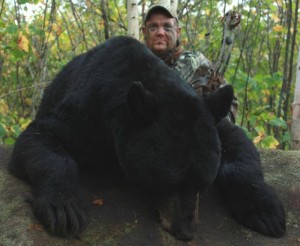 Black bear have relatively poor eyesight, but outstanding hearing and acute sense of smell. Once they get a taste of your bait, and, as long as it is replenished regularly, they will be reluctant to leave the area.  In fact, once a site is established properly, you can and will see the same bruin day after day.

Location is Critical
Our bait stations have been established for many years (since 1972) and placed along the bear’s natural movement corridor. Heavily  timbered forests near cutovers and waterways often sustain good bear densities.  With berry crops like wild blueberries and raspberries nearby, black bear favor the accessibility and abundance of such forage and most often reside in the proximity.

Claw marks on deciduous trees and there may even be fresh markings, these lasting scars unveil a historical presence. Nomadic creatures, bear commonly travel traditional trails along waterways and natural movement corridors like valleys and ridges.  Finding fresh scat can instill further confidence that bear have frequented the bait.  Keep in mind that well established bait stations offer much more success than new stations since bear follow these game trails year after year.

← How to Identify a Gray Wolf
Fire Without Matches →