Cold, blustery days in early winter are not the best days to go grouse hunting. Neither are, humid, September days. Essentially, the best time to go grouse hunting is when you can. And if that means dealing with the weather de jour- so be it. That doesn’t mean you can’t find some grouse, and even pocket a few, regardless of the weather.

Grouse like to stay cool in early fall when Indian summer days send the thermometer to summer-like temperatures. During those glorious fall days grouse will sleep in on their cozy roost and then venture out into a sunlit patch to soak up the warming October rays. November and December is a transitional period when cover becomes as much a priority as food. Staying warm and out of the wrath of heat-sapping winds and cold makes the places that grouse frequent during the late fall and early winter months predictable. Most times the mercury can give you a heads-up on which way to go.

Ruffed grouse seasons open in September in Ontario. Going hunting then is more a testament to tradition than it is to wanting to kill grouse. Foliage is thick, dense and green. But, if you insist on subjecting yourself to this kind of brutality you might as well give yourself the best chance at finding birds.

Look at the thermometer and you’ll realize that one of the best places to look for early season grouse is near rivers and streams. Waterways provide cool summer oases for grouse and you usually won’t find them far from the same habitat come early fall. During especially dry years, the moist soils found along rivers and streams may be one of the few places that you’re going to find the types of vegetation that produce the fruits and berries that grouse love so much.

Another reason early season grouse can be found along waterways is that the thick vegetation protects grouse broods from predators. Moist soils produce lush habitat that is ideal for protecting young grouse broods and the temperate environment produces a lot of high-protein invertebrates that are critical to young grouse growth and survival. Working along river bottoms and creek beds can be a good tactic because grouse broods can often be found in or close to their brood habitat.

Grouse are often still in broods or tight-knit family groups in September and October and can be concentrated and difficult to find. Perseverance can pay off. You might hunt several prime coverts without success and then bust several coveys in a short period of time. The trick is to keep at it. When you do run into some birds, you’ll usually find a bunch and chasing down singles after the flock is broken up can produce some quick shooting.

And quick shooting is what you can expect this time of year. Shooting grouse is never easy, but the task is made increasingly difficult when foliage is thick and catching even a glimpse of a bird is tricky. In the early season, you need to post, plan and resist the temptation to go in after them. It’s fruitless. If you have a dog, let them do the dirty work. Instead, look for openings, deer trails, clearings and post where you can get a shot if a bird flushes in your direction. Put a bell on your dog so your can keep track of his location at all times. Let one hunter bust the brush while the other walks a logging road where a flushing bird just might offer a shot. Don’t wait for an open shot. You’ll never get one! Instead, instinctively point and shoot even if you only catch a fleeting glimpse of the bird. Many times I never even knew I’d hit the bird until the dog came back with the grouse in its mouth. Be sure to keep in constant contact with your hunting party and know their location for safety sake and wear plenty of hunter’s orange.

Think wide open chokes and small shot during the early season. Grouse are not difficult birds to bring down, so put a lot of shot in the air and maybe just a pellet or two will get through the trees and hit its mark.

Weather and temperatures can be quite diverse in October. You might be rewarded with one of those cool, sunny, perfect fall days that grouse hunters live for. But don’t be surprised if you’re forced to pull out the woolies and gloves either. And you might even wake up to some fresh tracking snow. That’s just how October is- transitional- and it’s a transitional period for grouse too.

Grouse have a smorgasbord of items to choose from in October and finding their preferred food source is often critical to finding numbers of grouse. Ripening fall fruits can draw grouse from far and wide. Grouse favor edge cover, and it’s no coincidence that some of their favorite culinary delights do best on edges where sunlight can penetrate the forest canopy. Depending on which state you live in, grouse can usually be found keying in on edge cover fruits like wild grapes, chokecherry, and a host of other fruity edibles. These open areas also produce some of old ruff’s favorite greens like wild strawberry and clover and are also places where they can find high-protein items like grasshoppers, crickets, and other insects.

When grouse numbers are high, they can be found in variety of cover types at this time of year. Even marginal grouse habitat will hold a few birds as grouse begin dispersing into new territories during the fall shuffle.

Cover becomes an increasingly important priority as the month wears on. October begins with it plenty of foliage and grouse can move about uninhibited. By the end of the month, the trees are bare, the wind has a foreshadowing bite to it and grouse must rely on their camouflage and staying hidden as much as possible. Still, you’ll find grouse wandering about in search of brunch or a late afternoon snack and those are two of the best times to hunt grouse at this time of year.

Obviously a peak time in October is the first week or two after the leaves have fallen. When this happens might vary by a few weeks from region to region, but it is prime time to be in the woods. Grouse seem to forget for a little while that they are not as invisible as they were just a few days earlier and their numbers are at a seasonal peak. You can actually see some of the grouse that you flush too.

At this time of year you can find grouse in some pretty unusual places far from what you’d consider ideal grouse cover. I’ve found grouse under a solitary crab apple tree in the middle of a field far from what you’d consider grouse cover. I’ve shot grouse out of fields of goldenrod that you’d think were more likely to hold pheasants. No patch of cover is too small or too thin to hold a grouse then.

Once snow blankets the ground the whole ballgame changes. Grouse that have survived the onslaught of hunters, wolves, owls and know that when their environment becomes covered in white they are vulnerable. Snow also covers up many of the grouse’s food sources and feeding becomes a little more risky and perilous. Grouse don’t go on those aimless strolls in search of food. Their search is more deliberate and of shorter duration when the thermometer starts to dip and the weather turns cold. Cover becomes more of a priority.

It’s important to ferret out productive versus non-productive cover as quickly as possible. I don’t know about you, but I’m not as young as I use to be. Those all-day jaunts of pounding the woods are over. I’m usually only good for about a half a day of hard hunting and I want to make the most of it. To do so requires that you develop a since for identifying the absolute best cover and hunt it hard. Learn to not waste time where you THINK there might be birds.

Remember those light loads and wide-open chokes you used in September? Put them away if you’re serious about killing grouse once the snow flies. Shots will be longer and birds will be tougher. Replace your 8’s and 9’s with high-brass 71/2’s or even 6’s. Take the skeet tubes out and go to improved or even a modified tube in one barrel. With your shooting eye in late season form you’ll still get the easy shots and with the heavier shot and tighter chokes you’ll be able to add a few birds you wouldn’t normally pocket.

Grouse are tough customers. That’s why most of us hunt them. But watching the thermometer you can get a better idea of where to begin your search and make your days in the woods a little more productive. 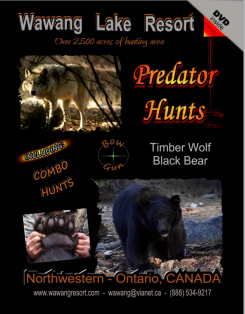 Check out our 24 pg. HUNT BOOKLET