One in a lifetime – photo by Tom Spears

Black  bears typically have two cubs; rarely, one or three. In northern  Alberta a black bear sow gave birth to five healthy young.  There were two or three reports of sows with as many as 4  cubs, but five  was, and is, very extraordinary. The photographer learned of them shortly  after they emerged from their den and set a goal of photographing all  five cubs with their mom – no matter how much time and effort was  involved. He knew the trail they followed on a fairly regular basis, usually  shortly before dark. After spending nearly four hours a day, seven days a  week, for more than six weeks, he had that once-in-a-lifetime opportunity and photographed them. He used  the equivalent of  a very fast film speed on his digital camera. The print is properly focused  and well exposed, with all six bears posing as if they were in a studio  for a family portrait. 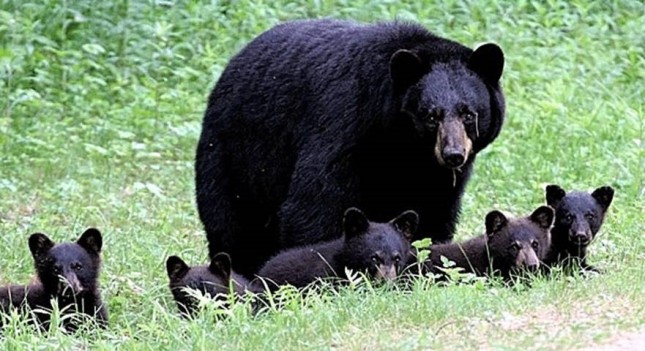 The photographer  stayed in touch with other people who saw the bears during the summer and  into the fall hunting season. All six bears continued to thrive. As time  for hibernation approached, he found still more folks who had seen  them, and everything remained OK. The photographer stayed away from the  bears because he was concerned that they might become habituated to  him, or to people in general, and treat them as approachable  friends. This could easily become dangerous for both man and animal.

After Halloween, no  further reports and could only hope the bears survived until they  hibernated. This spring, just before the snow disappeared, all six bears  came out of their den and wandered all over the same  familiar  territory they trekked in the spring.

The photographer saw  them before mid-April and dreamed nightly of taking another family  portrait, a highly improbable second once-in-a-lifetime photograph.  He achieved his dream. 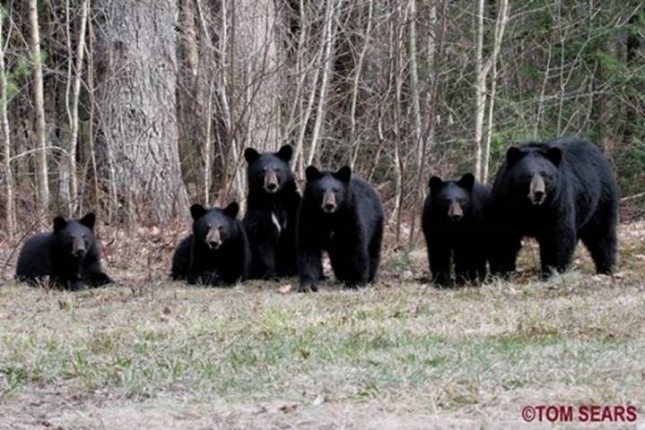 When  something as  magical as this happens between man and animal, Native Americans say,  “We have walked together in the shadow of a rainbow.” And so it is with  humility and great pleasure that I share these   exhilarating  photos with  you.  Do  pass them on!