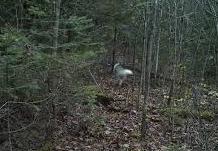 Nathan was unsure of what to expect when he arrived at Wawang Lake.  He knew first hand that we produce nice bear as his father-in-law Randy had taken one the year before.  Randy had planned his return visit as soon as he landed his bear and knew he just had to bring Nathan.

Nathan had a very eventful first night with plenty of action….from the wolves!  As he returned to camp the first night, he was so excited to tell us that he was ‘almost eaten by a wolf!’.  As he sat his stand, there was a full wolf symphony surrounding him and echoing in the trees.  At the last minute, he caught a flash of white from the corner of his eye and caught the tail end of a wolf leaving his bait site.

On the second day of their hunt Nathan got his bear.  A nice 175 lb black bear and very credible with beautiful black/blue cape and all.

While waiting for the others in his group to come by to pick him up Nathan amused himself by walking out to the road to see what he could see, when suddenly he saw a HUGE black bear walking right towards him.  Quickly thinking, he made himself bigger by raising his arms above his head and yelled ‘Hi Bear!!”, however, his voice cracked from anxiety and came out in a high-pitched, girly, squeal instead .  Just as the bear veered and went into the bush Nathan turned around and noticed a couple more bear walking out from the other side of the road towards his bait site but these ones paid him no mind.

It was beginning to get dark and Nathan started walking towards the junction where he was to meet up with his hunt party, he turned and shuddered – ANOTHER BEAR and this one was glaring right at him from out of the brush just behind where he stood.  The hairs on the back of his neck stood right up as again Nathan said in a high pitched voice while waving his arms high above his head, ‘Hi bear!!’ hoping to scare it off.   The bear disappeared back into the dark abyss of the shadowing timber.

After seeing numerous bear all around he abuptly went into a hunting stance, now alert as he pointed and aimed his bow, swinging in all directions – getting ready for the attack.  It didn’t happen and at that very same moment the truck drove up as Nathan sighed in relief – it was a welcome sight.

It was a tense moment there for a while, one we’re sure Nathan will never forget and that he’ll repeat over and over for years to come of his encounter with multiple bear during his first black bear hunt at Wawang Lake.

The truth is the bear were only interested in the bait site and the alluring, delicious smells it was emitting.  It goes to show just how active our baits really are, and, Nathan got to see first hand when we say our baits have multiple bear on the baits – we’re not stretching the truth – not one bit!