RSS
← How To Prevent Venison From Tasting Awful
Ozonics: How Does it Work? →

These are 10 of the most awesome adventure campers ever made.

If you want to go car camping in the wild — the real wild — your Toyota Camry is not going to cut it. No my friend, you’re going to need something with some more chutzpah.

These 10 heavy-duty adventure campers are designed to crawl over any terrain that stands in their way, be it a steep mountain or dense jungle brush. Heck, some of them can even drive across the ocean.

1The Jeep Forward Control is a unique utility vehicle that was made from 1956 to 1965. These trucks feature a cab over engine layout that gives the vehicle a shorter wheelbase.

Jeep Forward Controls were made as both a pickup truck and a van. Both designs are great vehicle platforms for rugged camper conversions, such as the one pictured above. Good luck finding one today.

2If you had the thought to put your RV on a jacked-up 4×4, EarthRoamer beat you to the punch.

The company makes heavy-duty, go-anywhere expedition campers that are loaded with the amenities you’d expect in an RV. The company started by building self-contained Jeep Wrangler camper conversions, but later switched to modifying Ford trucks like the F-650 featured above.

3The Terra Wind is a fully-loaded luxury motor home that can operate on land and water. 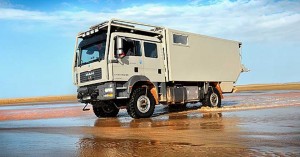 4Ok, it kind of looks like a garbage truck, but don’t let this rugged camper’s exterior fool you.

Inside you’ll find high-grade wood paneling, skylights, a shower room, multiple beds, a kitchen, stereo system and a whole lot more. This self-contained camper is also about as durable as adventure vehicles come. Plus, it can charge over anything in its path.

5The Unimog is the quintessential heavy-duty expedition vehicle. Manufactured by Mercedes-Benz, this rugged vehicle has portal axles for high ground clearance and flexible frames to handle rough terrain changes.

The Unimog’s powerful off-road capabilities have made it a big hit among adventurers and explorers. 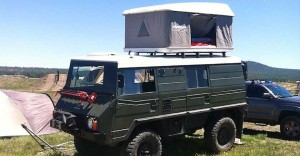 6Similar to Unimogs, Pinzaugers are highly-capable all-terrain vehicles. They were originally designed for military use, but adventurers and expeditionists have taken a shine to them for their off-road capabilities, carrying capacity and durability.

These powerful vehicles can drive up and over just about anything in their way.

7Engineering whiz Rick Dobbertin built this one-of-a-kind camper out of a stainless-steel milk tank, and drove it from Florida to South America and back again via the Gulf of Mexico in 1995.

It has living quarters inside, and a front dash that looks kind of like it belongs in a spaceship. There’s only one Dobbertin Surface Orbiter in existence, and we wish we owned it. 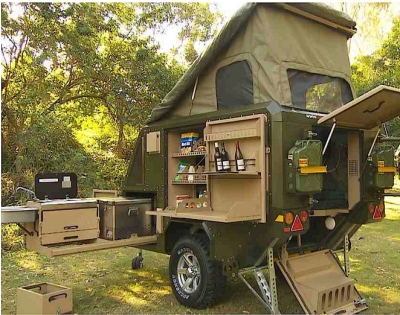 9Sportsmobile has been making customizable adventure campers since 1961. They convert Ford, Chevy/GM and Mercedes Benz vans into off-road vehicles.

As you can tell by the Sportsmobile featured above, they can get pretty tricked out.

10Okay, it’s not a rugged all-terrain vehicle, but Ford’s 1958 push button station wagon camper is just too cool to leave off this list.

This one-of-a-kind camper contains a lifeboat and shelter that both unfold on the roof at the push of a button. It also has an unfolding kitchen with a refrigerator, sink and stove, and dozens of other automated gadgets.

← How To Prevent Venison From Tasting Awful
Ozonics: How Does it Work? →