A number of years ago, Work Sharp, which is a division of Darex, set the cutlery world on its ear by introducing an electric belt sharpener that would put an edge on most anything in seconds, and without overheating the blade, tearing off steel, or baffling the user. 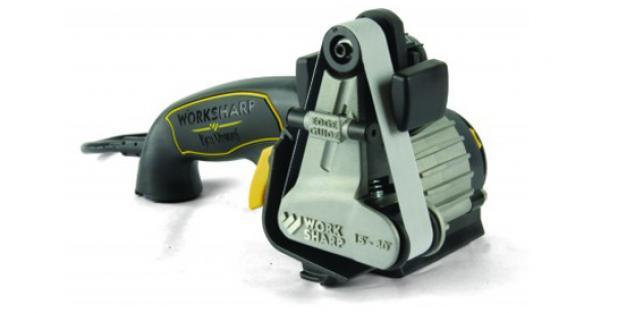 Now, Work Sharp has outdone itself by having custom knifemaker and designer Ken Onion put together an improved version that bears his name. The new Ken Onion Work Sharp has a more powerful, variable-speed motor, wider belts with better abrasive, a guide that lets you adjust your bevel from 15 degrees to 30 degrees, and upgrade kits that expand its already awe-inspiring capabilities. Using its full range of accessories, this tool can sharpen anything from a shovel to a scalpel.

Among its features is something I haven’t seen before—a work chart printed on heavy cardboard (also suitable for framing, in case you’re tired of your Vermeer or Lautrec) that shows you just how to proceed with all this technology. Let’s say you want to sharpen a hunting knife, so you look under “Hunting Knife” and below that you choose between “Haggered” (That’s how they spell it, and it’s the wrong word, but what the hell.) and “Dull.” Choose one of the two sets of directions  that follow and you get the angle and speed at which to sharpen, the progression of belts to use, and how many strokes you give the edge on each side.

Especially intriguing is the subcategory called “Bragging Rights,” below which appears “How sharp can you get?” and below that, “Ridiculous,” following which is a formula that will get your knife sharp enough to perform corneal surgery.

What Worksharp does not make much of, and should, is the fact that its system gives you a rolled, or Moran-style edge, which can only be gotten with a belt. The rolled edge is convex in cross section rather than flat, and is very strong and long lasting because it leaves more steel where the metal meets the meat. When I asked Worksharp why they didn’t make more of it, the answer was that not many people appreciate such a refinement. So be it. But now you do.

If your needs are more modest, there’s another Worksharp product that costs far less than the Ken Onion Sharpener (which is $150) and that is the Guided Field Sharpener 221, which is about all I ever use, and which is so good that I have three—one in the shop, one in the kitchen, and one with my hunting gear. It ‘s about the size of a large folding knife, offers five sharpening steps (of which I only use only two) and costs $34.95. It’s as foolproof in its own way as the Ken Onion Sharpener.

Posted by Wawang Lake on September 9, 2015 in animal tracks, How to Use a Knife, knives, news, preparation, Wawang Lake Resort